Today I chose frog pose instead of Facebook. Normally on a Saturday morning, I’d be drinking my coffee thumbing through my newsfeed on my phone and suddenly realize an hour or so had gone by. This morning, I strained in a position that rather looks like a dead frog on the yoga studio floor thinking about all that had happened this week. Those hip opening poses are good for bringing up “stuff,” letting go of stress, as yogis know.

I committed, I will continue to try to understand people who supported what I believe to be a fascist, racist and misogynistic platform. I will try to find ways to mend and repair wounds with my family. And maybe, even find a way to sit around the Thanksgiving table with them once more (though I know they don’t want me saying “grace” this year especially with our heightened awareness of the plight of our Native American friends this year).

But as soon as I left yoga, almost as if a test of my new-found strength, I was faced with an angry text from a family member about Garrison Keillor’s prolific and witty article I shared on Facebook about “liberal elitists” going back to growing heirloom tomatoes, making homemade pasta, doing yoga, meditating and reading the books on their shelves while those who voted this way dealt with what they put in office. Yep, I was actually insulted about doing yoga and having books on my shelves. And told basically not to bother coming home (to WV) because even if I apologized (for what I’m not sure) that “you owe an apology to all of us uneducated family members.” And  “I don’t see how you could face them anyway/vice versa.”I will admit, I yelled, I cried, I did not handle the situation “with love” at first. But I came back to my intention. I stood my ground.

You see, like many families this week, this entire election, my family is divided. It’s them against me, apparently. (It’s not all of them actually, just a small group in my beloved home state of West Virginia, coincidentally taglined “almost heaven” for its beauty, but also wrought with a failing coal industry, anger and poverty.) But it was okay for those few family members to troll on my Facebook and embarrass me with their alt-right intolerance in front of my community where I’ve built my career. It was okay, even after I asked not to fight with my friends and my colleagues on my posts; it was okay for them to continue to disrespect me. It was okay for over 10 years to make fun of my liberal views like I didn’t know what was going on (when meanwhile some don’t believe global warming is an actual issue). But that’s okay. I know what’s what – and where I stand.

Much like throughout the campaign’s rhetoric that touted liberals as elitists, those on “the other side” feel insulted by being called “uneducated” as the poll’s demographics suggested. And apparently, my last blog post that called my family out on over a decade of bullying for my liberal beliefs, also stirred up a lot of insecurities about their education, or lack thereof, which was not the point at all. I never said I hated white men as I was accused of, in fact I said “this is not about overthrowing the white man” in my post Today Women Will Grab Trump by the Ball…ots. The point was intolerance of race and religion by Christian hypocrites, the point was to address the pain and fear that minorities (including women) are feeling right now.

I understand that many educated, successful people voted differently than I did. I even had a good ol’ heart to heart with my daddy, which I haven’t done in years (another cathartic ray of sunshine in this darkness), about his reasons for hope for our future, and I understand why he voted the way he did. I know why a lot of people voted the way they did, I understand. What I do not understand is why so many of them continue to bully those (more than half of America’s popular vote) who feel differently.

I do not nor have ever considered myself a scholar like many I admire and read. I could not hold a debate in public to save my life (in fact I froze up every year my Rush-Limbaugh-loving uncle tried to debate me over my support of our admirable President Obama or other liberal views at the Thanksgiving dinner table). I am just a writer, who researches and reads. A magazine editor where in my work I tell positive stories of local businesses and people and style beautiful photo shoots. I am not an investigative reporter or even by trade a “real journalist” I feel most days. I have a BA in English with minors in International Business and Spanish. I love learning about different cultures and food and marketing and writing and they all work together personally and professionally and I love my life. I am a gal with an eye for style. But not to be mistaken by my fashion sense – I am a strong woman who speaks her mind and stands up for herself when put to the fire.

I was inspired this week by being put down by a few who don’t respect me; I have been down this road before as young woman business leader. I have endured several negative events meant to silence me and from them I found a few blessings. From those events, particularly this week, I vowed to be a beacon of love. A voice of hope.

I humbly share this personal family turmoil as a reminder that we lovers of peace and all people are not alone. I have sadly heard from so many friends who are going through similar strife with their families right now. 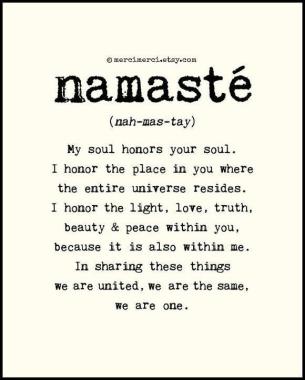 It was coincidental timing that I finally drug myself back to my yoga studio today – it happens to be “bring a friend week” at Evolution Power Yoga, just as I was looking for a way to spread love. Like Keillor’s article for The Washington Post this week, I turned to the only thing I knew to find peace, within (it starts with us), with meditation, and felt compelled to outwardly relieve some stress through the practice of asanas. This week, I invite my friends to join me in yoga practice – I will go 6 days in a row if it helps just one person find peace in these uncertain times.