Today is a big day in our country. A moment in history.

Eight years ago, we made history. Today, we will walk #StrongerTogether in white like the suffragists before us to vote for our first female president. But this won’t be the end of it. It won’t “just be over” today.

For the last eight years, I’ve endured the slurred comments by my loving family in the rural state of West Virginia, things such as “this is your fault, you voted for him,” referring to problems like our country’s healthcare crisis because the Affordable Care Act isn’t being allowed to work as it was meant to. But never mind that President Obama has protected more land and water than any US president, those are vital natural resources.

I grew up in a town where there was only really one or two families who were not white and only one of those was black and the other was a Filipino family – the family of one of my best friends to this day.

In college, I continued my Spanish language studies by minoring in the subject and made another best friend for life, who was born in Colima, Mexico before her parents brought her to California in kindergarten. Her dad worked in fruit farming and I loved to hear about their family, culture… and the food we cooked together. I also got to know some undocumented immigrants by working in restaurants with them myself who were not “rapists and thugs” as The Donald suggests (I refuse to give his brand any more promotion than this election has already been for him). Staying on track unlike him in debates, these immigrants were some of the hardest working people I ever met. One teenage boy stands out in my mind, they called him “Chiquito” (small boy) and I remember feeling so sad that he was here and working so hard all the time, not enjoying his youth, but he was proud to be supporting his family. I practiced my Spanish by speaking with them on a daily basis, their sole purpose was to work hard and send money to support their families. They did kitchen prep work and dirty dishwasher jobs (and they did them without smoke breaks or harassing waitresses like some of the American men that did these jobs in other restaurants). The Mexicans worked late nights and early mornings and slept all together like slaves in the basement of the restaurant owner’s home and never got to do anything but work, work, work. But they were happy for that opportunity.

I honestly don’t remember how they got here, but what I do know is that their people were here first. The Aztec people – the ancestors of the Mexican people – were here long before any of our ancestors my fellow white American immigrants, as were the Native Americans.

I tried to bring this up once at our family’s Thanksgiving dinner in 2003. My southern Baptist Granny asked me to say grace before dinner. I had been studying Native American poetry in college and felt compelled to pray “And let us not forget what this holiday is really about, that ‘our people’ stole this land from the Native Americans, as we sit here gluttonous and feasting, while Native Americans have been shoved onto reservations to become drug and alcohol addicted running casinos…” My young cousins looked up from their prayer hands, eyes large. They joked in their teenage years how funny it was. The story has been a joke in our family for years. And I have seriously never said grace again.

That’s the thing, my family has seen me as a joke for all of these years – the “left wing, bleeding heart liberal” black sheep of the family. And I don’t care. I was happy to be the butt of their jokes as long as I was never on the same side of their beliefs. They thought I didn’t know what I was talking about because I don’t watch Fox News all day, didn’t matter that I read up to 10 respected news outlets each morning.

The news is becoming a whole other issue of division. People who don’t trust “liberal media” spreading lies and fake news and fueling more aggression, anger and distrust. Some of which has been seemingly a ploy for The Donald’s next move in his reality show called life. But some of which was brewing long before he took the stage.

This division in families, among friends, in communities, was always there. I’ve seen a few women speak up in my newsfeed pleading that we keep our voting secret as it was meant to be. Some women in conservative Christian marriages and church groups sadly still have to. Normally, politics and religion were not matters I discussed with most people out of respect. I never took a stance on social media, especially because of my profession as a member of the media and for fear of alienating business owners in our community. But this year was different. As Cumberland County’s first female to hold an elected office, Senator Pat Vance said in an article that I recently chose to honor her in as she retires this year, “All it takes for evil to prevail is for good people to do nothing.” A former nurse, among her political career achievements was a bill that prevented insurance companies from discriminating against victims of domestic violence, expansions of Pennsylvania’s prescription drug program for senior citizens, and development of a “bill of rights” for HMO health care customers, protection for children and the physically and intellectually disabled, as well as combating drug abuse and limiting civil lawsuits.

I see similar hope in the woman we get to vote for for president today. I see a woman who has worked her entire career for the causes of underprivileged people and has faced and overcome more scrutiny than anyone ever running for office (irony is, many of those are the poor people from my home state who hate her).

I texted my family last night in West Virginia to express my anxieties over returning home for Thanksgiving this year at a time so close to this historic election. Not only have I been having a hard time thinking of sitting around a table sharing a meal that celebrates Columbus stealing this land from the Native Americans, but also looking people in the eye who support a racist misogynist who would threaten to grab my daughter by the pussy. Call me a “nasty woman” but how anyone can condone his behavior is unbelievable to me (I know they feel the same way about Hillary, but she has never been proven to have done anything she is accused of, are we not innocent until proven guilty in this country?). Those soldiers, that was not her fault, she was Secretary of State not a military general. The emails…we know, we know, but there’s nothing there. And at this point on the day of this election, I feel there is nothing there for me to return to in my home state this holiday. I fear a civil war by the angry supporters of hate. I fear my safety in a place where Fox News spreads mistrust and my “fancy car” that’s not a Ford truck and Pennsylvania tags make me some kind of “Yankee Yippie” target. But I am most saddened by the disrespect with which I have been treated by my family. I have not once trolled on any family or friends’ ridiculous social media shares, but have been ridiculed and called names and utterly embarrassed in front of my community by those with views different from mine. I have noticed a pattern of those supporting Hillary in my posts treating the other side with respect and factual discussion, while those who support Trump jump on social media and argue with anyone and everyone. I don’t want to argue with anyone, I just want to be treated with the same respect I have tried to show those with a different view.

I know there are many more like me who have been disrespected and alienated by families, maybe even within your own homes by husbands. Maybe you chose not to talk about it and stayed out of the fire. I just could not sit back this year and not speak up against evil. I studied brave, revolutionary women Renaissance writers who were not allowed to write but did it anyway. Suffragists fought for our right to speak up and be heard. I will write, I will talk, I will walk wearing white to my polling place and vote.

Rather continue to see the hatred of history repeating itself, whether divisions among families or a feared full blown civil war, it is time to put differences aside today as we all partake in our freedom to vote.

We have made progress with our first black president and today, our first female president. Maybe our first Latino president is next. It’s not about overthrowing the “white man” or the entire government for that matter, but choosing the people we the majority of the people see as leaders of our great democracy.

My hope is that we learn to accept and appreciate people with different skin colors, who speak other languages. Do you know how hard it is to learn the English language, yet look how many other countries learn English as well as another language. Meanwhile, in good ol’ ‘Merica, we have mostly the people who don’t even know how to use their (they’re, there) own language properly who hate on those who don’t speak English, let alone don’t accept Christianity. While we’re on taboo subjects, has it ever occurred to Christians that all of these other religions have the same kind of Bibles (written by men to control women and others) with the same stories of “miracles” and made up rules to follow or be damned? What if politics and religion aside, we just tried to be good people? Be good to one another. (Those were the words our priest said to us before our wedding, and good advice, it’s all the other stuff I have a moral problem with.)

I was so inspired by the post I saw in a Facebook group I was invited to called Pantsuit Nation. 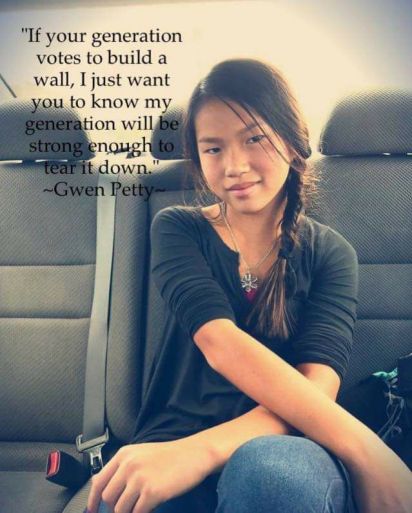 I have been teaching my daughter Spanish since she was born because nearly half of this country is Spanish speaking. Like it or not, it is a second language of this country. (By the way, most of Europe is like that with signs in other languages, educated people who speak several languages, and we have a lot to learn from our fellow world citizens.) My hope is that our children won’t see skin color as a cause for fear or judgement. My hope is that she will see all people as equals – just as she does now at preschool with friends of several different skin tones and cultures. You see, our generation does not need a book of Bible stories or men telling us how to be good people.

We have had a most exemplary First Family for the past eight years whose time in office has unfortunately been overshadowed by some with racism and hate – the majority of this country is clearly making progress with our first black President and next, our first female president.

I am excited to share this day with my daughter, voting for a strong female leader who is going to grab this election by the ball…ots!